The Fog has Rolled in from the South 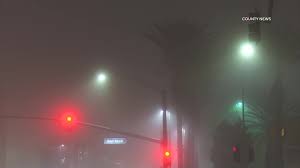 The thick, misty, mysterious fog has rolled in from the Pacific. First seen in San Diego, this newly named San Diego Fog is formed when water vapor, or water in its gaseous form, condense. The fog has made Orange County residents a little scared, especially while driving. The fog has made  drivers experience zero visibility while on the road heading to work. This fog is thick and hard to see through. Some have said that, “you can’t see your hand in front of your face.”

Some people have had to stay home rather than going into the fog and to avoid crashing in to other cars. Whatever your schedule may require, add a little extra time for traveling. Be safe out there in this fog.